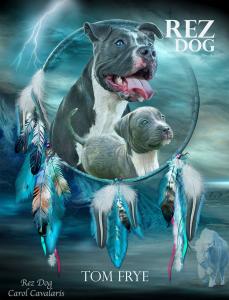 I recently finished this custom cover art for 'Rez Dog',the latest novel written by Tom Frye. Rocket, and pup, Ghost, are pit bull characters in a story with a great theme about not raising this breed to be fighting dogs.

Tom had seen some of my art on t-shirts, and he contacted me to create the cover art. I agreed to do the project, and he was writing an email to explain what he wanted, and to enclose an image he got off the web, of what his vision was for the cover. As he was looking at the image, which was wolves within a dreamcatcher, he suddenly realized the art that had inspired him was mine. This blew him away because he had contacted me without knowing I was the artist. What a wonderful moment we had enjoying the serendipity of our coming together.

The thunder beings were active the night he was born on Pine Ridge. The Pit bull pup was named Wakinyan tonwapi, meaning the source of thunder and lighting in Lakota. But his DEA handler simply called him Rocket. In his ten year service as a DEA sniffer dog, Rocket alerted to millions of dollars worth of drugs belonging to Mexican cartels. Upon his retirement, Rocket is placed at a dog sanctuary run by dog trainer, Chade Long Soldier, located in Seward, Nebraska. When the dog is stolen by a cartel leader, the race is on to save him.

To view 'Rez Dog', as well as other novels written by Tom Frye, please visit: www.tomfrye.org.