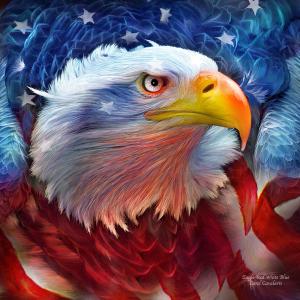 I've always found it interesting that the art I create has a life of its own. Like a child, I conceive it, nurture it, fret over it, love it with all my heart, and then at some point must release it into the world. And let the world have its way with it. Some art is adored, other art is ignored. And everything in-between. The Universe decides and I can only watch and hope for the best.

Eagle Red White Blue has had several exciting adventures so far. The art first became a print, and now resides in many homes around the world. It also resides on duvet covers, and pillows, shower curtains, tote bags and cell phones, going places and doing things I can't even imagine.

The art has been Blogged, Tweeted, Pinned, Facebooked, Instagramed, YouTubed, Linked, and yes, even used and abused in ways I don't want to know about. :o)

The Mountain put the art on a T-shirt, and it has traveled who knows where on people's bodies. The traveling didn't stop there, for a very patriotic veteran who loves eagles put the image on her vehicle as a car wrap. So it is now traveling faster than an eagle can fly. Then it landed on the ground, when a chalk artist was inspired to duplicate the image. He created a giant sidewalk drawing for a festival, to be enjoyed for only a moment in time before rain washed the eagle away forever.

Yes, Eagle Red White Blue has had a very exciting life so far, and we are both looking forward to the next adventure.