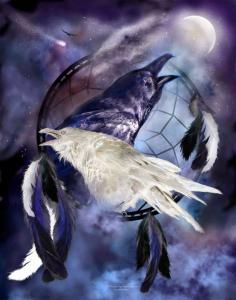 I am an artist and a fiction writer, so I often create art that inspires a story, or a story that inspires art. This artwork, Legend Of The White Raven, inspired a story.

Legend Of The White Raven art and story by Carol Cavalaris

An ancient legend tells of a miserly Chief who stole the sun, the stars, and the moon for himself, and the world grew cold and darker than a raven's wings. Soon all life began to die. People were so frightened and confused they even blamed this evil on the black raven. The raven did not like that humans thought him responsible for this dark magic and death, for in his heart he was pure with good intentions, and his spirit was innovative, and often playful, and his very being was a creature of creation. His true purpose was to become one with humans and guide them on a spirit path of changes leading to healing the inner self.

Though the raven knew the journey would not be easy, he also knew he could not change circumstances without taking risks and so he set out to find the miserly Chief. He did not eat or sleep for more dark days and nights than he could count. He couldn't see and followed his intuition. Belief in his purpose kept his tired wings moving. And when he didn't think he could take one more breath, he finally came upon the miserly Chief.

Broken and bleeding, and barely alive, the raven took back the sun, stars, and moon and with his last breath, returned them to the sky. And then he fell to earth, unable to fly and waiting for the end. But for him it was a new beginning, for the moon beamed down and bathed him in healing light, turning the raven's black feathers pure white, as white as the moon. And from that moment on, the raven would never be feared. Instead he would be a messenger of strength, survival, change, and eternal hope, for he had brought light, peace, and life back to the world.